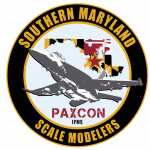 In May 2001 Chuck Conner decided he wanted to talk about scale models with other modelers in the Southern Maryland area.  He knew there were other modelers because he shopped at Doug’s Hobby Shop and one of the salesmen there said quite a few modelers came in to buy.  So Chuck put a flyer up for the first meeting — Third Thursday, 7 pm on June 2001 at Doug’s.

Membership requirements are simple: show up and talk about scale models.  Well, okay, just show up.  Actually, just give me your email address and you’re on the distribution list, which is all we require to be a member.

A couple of guys showed up and they agreed to meet every 3rd Thursday of the month at 7 pm.  Some months Chuck sat by himself and most months only 3-6 people showed up, but he was reliably there so folks could come by and talk about models and modeling, any genre.

In October 2002 Chuck published the first newsletter, “Small World”.  He continued to publish news, notes, and announcements every month after that.  In September 2012 the printed newsletter was moved online into a blog format. In 2017 Chuck decided to retire and passed the baton to Tim Holland.  By this time the Club had cycled through the Fire Department, and Library, meeting at the Pax River Museum.  The Club had grown to 60 members and generally the monthly meetings had about 15 attendees give or take.

In 2020 with the pandemic keeping everyone at home, the Club moved its monthly meetings to an online format and to help with everyone’s sanity began a weekly discussion called “Let’s Talk Models!”.  The Club also agreed to become a local Chapter of the IPMS/USA, Region 2.

In 2021 the Club agreed to host a local Scale Model Show and Contest every odd year in October opposite the biennial Baltimore/DC show called MarauderCon. The first Patuxent River Contest — PAXCON — will be October 7th, 2023.

When everyone could meet in person again, the Club moved its monthly meetings to High Tide Games, continuing to meet on the 3rd Thursday of each month at 7pm.  The Club continues the tradition of online meetings on the first Thursday at 7pm.  Attendance in person has now grown to about 20 and the online discussions are usually about 12.

Membership dues have never changed.  We still don’t require dues but we might ask for a donation to pay for pizza.

As always, we hope to see modelers at the meeting who want to talk about their models and the techniques they used to make them.